I’m not sure what to make of this, and I’m loath to give this man any sort of publicity, however minor. That said, there is no doubt that rather more well-read websites than this will jump on the opportunity to highlight the horrendous implication that someone like Breivik could ‘learn’ to kill using a video game. 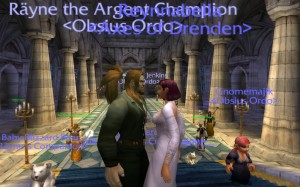 A World of Warcraft wedding - while the MMORPG has been responsible for its fair share of marriages and divorces, it does not seem like a training ground for mass murderers.

I confess that Call of Duty, which Breivik claims to have used to “develop [his] target acquisition”, is not to my tastes but to suggest that it could be in some way responsible for what happened in Norway (as some quarters of the press seem to imply) is ridiculous. Breivik’s interest in the fantastical World of Warcraft is also dredged up, as if playing a game featuring orcs, gnomes and night elves could somehow prepare him for the very real and truly horrifying act of mass murder. That the 10 million other WoW subscribers aren’t using the game as some sort of murderous training simulator suggests that it has little to do with the actions of an evil, deluded man.