Will Wright’s original SimCity (1989) and its isometric sequel, SimCity 2000 (1994), are perhaps the games that first made me consider the educational possibilities of my favourite pastime. The original SimCity I played somewhat vicariously over my Amiga-owning friend’s shoulder. SimCity 2000, however, I had all to myself and I played it for hours on end on our Mac at home. At school, my forward-thinking geography teacher also allowed me to install it on the department’s Mac. He could probably see the potential in it as a learning tool and certainly recognised that the game could engage the teenage me in a way that some of his colleagues could not. It was never going to find its way on to the curriculum, of course, but it was an exciting possibility for the future. 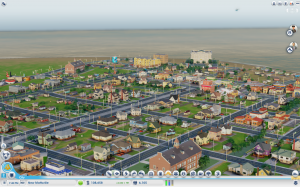 The 2013 version of SimCity marks the return of a series which has lain dormant since the release of SimCity 4 in 2003 (excluding spin-offs such as the Nintendo DS version, the less successful SimCity Societies and the myriad versions of the wildly popular The Sims franchise). At its core, SimCity is exactly what the name implies: a city simulator, wherein you assume the role of major, albeit with some unconventional leanings towards omnipotence not usually associated with City Hall. It’s a kind of civic sandbox, featuring all the toys with which a budding mayor might expect to be able to play. While this new iteration introduces a steady stream of mayoral objectives, the game has traditionally set few fixed goals. Instead, the player is free to craft their city as they see fit: adjusting taxes, investing in public services, building essential infrastructure such as roads, and so on. Perhaps the most important tool in your repertoire is that which allows you to designate areas of your city as residential, commercial or industrial zones, determining what your citizens – known as Sims – can build there.

Tinkering with your city and watching it grow is strangely addictive stuff. Like its predecessors, SimCity offers feedback to the player in countless forms, from the often quite beautiful picture the game paints of your living, breathing city, to the multitude of tables, reports and graphs you can pull up on your city’s finances, crime levels, educational performance and other social statistics. All of these feedback mechanisms, coupled with the ability to play the game at your own pace – both in the literal sense (you can slow and speed up time) and in the sense that there’s no real need to gallop ahead and build a sprawling metropolis if you’d rather cultivate a bustling hamlet – encourage the player to set their own personal goals. Because there’s nobody telling you what to do or when to do it as in, say, a school classroom, the motivation to meet these goals is entirely intrinsic. 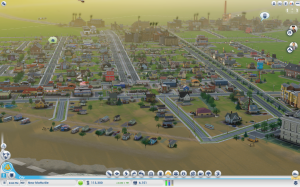 This new SimCity, however, makes one significant departure for the series: it is designed to be played online as a multiplayer experience. This is important for a number of reasons. First, of course, it introduces the prospect of a rather more extrinsic form of motivation: competition. Second, because the game insists on connecting to servers operated by the game’s publisher, EA, every time you play – even if you have no intention of interacting with other players – those servers have to be up-and-running. However, in the few days since the US launch of the game, and to a lesser extent in the hours since it was released in Europe, EA’s servers have not been up to the task. Thousands of disgruntled would-be mayors cannot play the game for which they just paid around £40, after a decade-long wait, simply because the servers are unable to cope with the volume of people attempting to log in. The publisher’s motivation for this arrangement (known as ‘digital rights management’, or DRM) is to protect against piracy. Their servers, as well as proving the ability to save your game to the ‘cloud’, and, apparently, crunching some of the complex numbers required by the city simulation, are also used to check your copy of the game is legitimate.

This debacle has overshadowed the launch of the game to such an extent that it is impossible to ignore in any review. The rights and wrongs of DRM are better covered elsewhere, but the situation raises some significant questions about the game’s suitability for use in a classroom. First, online connectivity requires EA’s Origin software to be installed and able to connect to the internet, introducing an additional hurdle for getting the game installed on a school, college or university network in the first place. Second, if the servers are down when you are scheduled to teach a SimCity-based class, that class isn’t going to happen. Of course, it’s likely that EA will have remedied the server situation by the time the game filters into classrooms but there is a larger question here: what happens when EA turns the servers off? As players of many of the same publisher’s sports titles will know, once those servers become unprofitable to run, or there’s a new version of the title they want to push, the server that facilitates online play is canned. So, whereas a school that invested in 30 copies of SimCity 4 a decade ago can still use that software, there’s every chance that the same will not apply to the new game in 2023.

This is something of a dilemma for educators considering SimCity as a potential learning tool. On the one hand, the game’s publishers are actively courting the educational market – apparently drawing inspiration from Valve’s seemingly more altruistic efforts with the physics-based Portal 2 game – via the simcityedu.org website, which offers lesson plans and other resources to kick-start teaching around the game. On the other, how many schools or colleges can afford to invest in multiple copies of a game that may become unplayable at the publisher’s whim? One must also add to the equation the cost of purchasing suitable hardware – the new SimCity is beautifully realised, to be sure, but it requires modern technology to render all of that stunning detail in real time.

In the end, and bearing in mind it’s only been out a day or two, it’s fair to say that SimCity will almost certainly gobble up what little spare time I can muster, and I’ll quickly forget my objections to what I consider to be Draconian DRM measures. From a learning point-of-view, however, I’ve yet to see anything in the game that couldn’t be done to some degree in its considerably more affordable predecessor, if not the version I showed to my geography teacher nearly 20 years ago. Either of these is rather more likely to run on the average school’s computers, which in some cases might actually be 20 years old.

This review was written as part of my coursework for the excellent Introduction to digital game-based learning course, headed up by Dr Hamish Macleod.